How can I help?

This past Sunday, I decided that I was tired of looking at the ugly weeds that began to take over our garden. They had grown so tall; they were such an eyesore. So, after our busy day, I told Sam I was going to weed the garden. He kind of looked at me like I was crazy and asked if I was sure… (If you know me, then you know that I think bugs and dirt are gross and icky, and I’m such a girly girl). I don’t know what got into me. I think it was the fact that I wanted to do something active and sweat off some fat! However, from the moment I pulled out that first weed, I regretted it immediately! The texture of the roots and dirt with moisture, YUCK! Anyway, I just kept going, and the more weeds I pulled, the more I started thinking about my life and how many times “weeds” have grown in my heart that I’ve had to ask God to yank, and sometimes I’ve even tried to do it on my own. I was reminded about how as Christians, we must constantly be on our guard to make sure that weeds aren’t growing over the godly seeds and plants that we have sowed and watered over time.
The thing about weeds is that they creep up, and sometimes we don’t notice them, sometimes a flower may even bloom and look so pretty, that we mistake it for a flower that we planted and watered ourselves. It’s not! It’s a weed. I almost didn’t pull one out because it was a pretty white little flower, then I realized it was an imposter, so I yanked it! I don’t want it messing up my pretty garden in the literal or hypothetical sense. As I was weeding, I came across three different types of weeds.
The first, are weeds that are easier to uproot than others. In the spiritual sense, these may look like selfishness, lying, jealousy, cursing, gossip, etc. (I know that sins are all equal, but because we’re human, we tend to categorize them on a “not so bad” to “extremely horrible” scale. So, for that reason, I’m categorizing them). These weeds may not seem so bad, but weeds are weeds and they will destroy the beautiful flowers one way or another. I was able to completely uproot some, and others I could only pull from the surface. That brings me to the second type of weeds I came across. These weeds were so deeply embedded in the ground, that there was no way I could uproot them. I knew that for those, I needed someone stronger than me to pull them out completely. I was only able to pull what was on the surface. They were so challenging and I got so aggravated because I knew that those would come back within a few days. I feel like that’s how it is when we have “weeds” in our hearts. Some are easier to get rid of and some are not so easy. We can pull some out on our own, or so we think, but no matter what, they still grow back some time after. Some we just pull from the top, but they grow back because the root is still there. We might only give God the “small” or “not so bad” weeds to get rid of, but what good will that do in the long run? 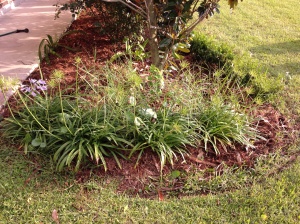 I looked at these and just knew that they were going to be a challenge. These are the worst kind because they are deeply rooted and they’re trying to pretend they aren’t weeds. So, I tried to muster all of the strength I could, and began pulling them like a mad woman! I was even talking to them, telling them, “Yeah, I see you! I’m not gunna let you think you belong here, because you don’t! Come here!” I’m not lying either hahaha. I eventually gave up. My hands, fingers and arms hurt from trying so hard. That’s exactly what happens in our lives, many times we give up, because it starts to hurt. The thing is, the pain won’t last forever and we’ll be better off anyway. The next day, my fingers still burned a little, but by the end of the day, that sensation was gone. So many times in my walk, I’ve tried to pull weeds out on my own, hesitant to give them to God, because I doubted that they’d really be uprooted. I’ve grown weeds of resentment, bitterness, low self-esteem, jealousy, and they kept my godly seeds from growing into the beautiful flowers they were intended to be. I couldn’t really enjoy God and all of the ways He would or could bless me. There was always something that would immediately shoot down anything that seemed nice. Weeds tend to stick/grow together. I would pull one out on one end and there would be a trail that led to more roots a few feet away. The same goes for the weeds in our lives that we think aren’t so bad. Bitterness can lead to anger, anger to hate, hate to actually hurting the person that caused us to be bitter, which can all lead up to the weeds that disguise themselves as flowers that are supposed to be there. This happens whether we have just begun our walk with God, or if we’ve been walking with God for years. We are never exempt from weeds growing, so we must be cautious. Daily, we must renew our hearts and minds and the moment we feel a weed growing, give it to God so that it won’t stand a chance. We must constantly work out our salvation. (Phil. 2:12)

So, have you weeded your garden lately?

One thought on “Have you weeded your garden lately?”